STAND UP COMEDY – ENGLISH EDITION is the new comedy label for english speaking people in Baden and the surrounding area. In collaboration with “Comedie Suisse”, the first stand-up comedy show will take place on Friday, November 26th at Druckerei Baden. 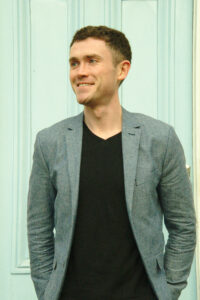 Peter Flanagan is one of the most in-demand comics on the British comedy circuit. His razor-sharp material and cool, calm delivery has brought him to the world’s top comedy venues. He’s a regular at London’s Comedy Store and he has performed at festivals and clubs everywhere from Australia to Dubai.

Whip-smart and uncompromising, Peter’s writing has appeared on the Irish Times, the Irish Independent, and Comedy Central UK. If you like your comedy smart, dark and laid back, then Peter Flanagan might be your new favourite comedian! 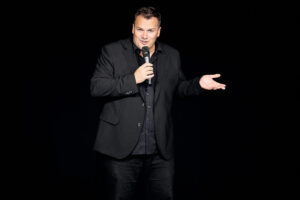 Benjamin Delahaye is a comedian based in Zurich. Juggling with marriage, two children, comedy gigs and tons of projects, Ben still believes he can have it all. His comedy will make you realize that all the stereotypes you hold about French people are not only true but also worse than you thought. He has performed all over Switzerland, in his home country France, in Los Angeles at the Comedy Store, in Singapore, Tokyo, Shanghai, Amsterdam, the UK & Australia. 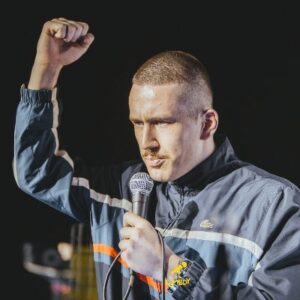 Boxer look, 80s-stache, scowl and yet funny? Anyone who thinks this combination doesn’t work has not yet seen Mateo Gudenrath from Basel. Don’t believe appearances, Mateo is eloquent, quick-witted and sharp. His comedy is a mixture of storytelling and weird theories: difficult to explain, easy to understand. Mateo won the Swiss Comedy Awards in 2020. 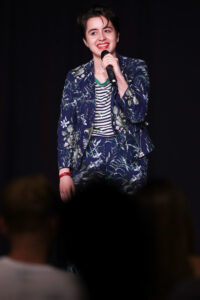 After realising her life was pretty much like in the telenovelas of her childhood in Mexico, Caro decided to joke about it at comedy clubs, where she talks about living as a young Latina in Switzerland, the stereotypes and confusion she has encountered & tell some anecdotes of her ridiculous dating life, because why not. Caro won the Swiss Comedy Awards in 2021.